From Scrabble to Checkers: Spending Time with a Stranger

Eight-year-old Brandon went to the nursing home every Sunday to visit his Grandma Alice. On the way, he would buy a half-dozen lemon filled donuts from Dinkins’s Delicious Donut’s. They were his Grandma Alice’s favorite sweet treat.

Each time Brandon arrived at the nursing home, he made sure to say hello to all of the other “grandmas and grandpas” as he made his way to the nurse’s station to hug his favorite nurse, Lila. He liked to have a joke prepared for her. Lila would greet Brandon with a smile and listen intently as he told her about his week and of course… she always laughed at his jokes.

After chatting with Lila for a bit, Brandon would pop his head into Grandma Alice’s room. She was always in the same place: in her chair next to the window so she could look out at the birds. Her floor lamp would be on, and a newspaper would be open in her lap. Of course, she’d be wearing pink cotton pajamas and her favorite fuzzy purple slippers with her glasses pushed down to the end of her nose. The room would smell like apples and cinnamon thanks to the plug-in Brandon had bought her for her last birthday.

Brandon would walk straight up to her and give her a big hug. Grandma Alice would squeeze him back and happily take the box of donuts. Then she would tell Brandon to get two paper plates from her cupboard and together they would each eat a donut. Afterward, Brandon and Grandma Alice would play Scrabble until it was time to say, “goodbye.” They never put the game away but always left it exactly as it was so that they could pick up where they left off on his next visit.

Brandon enjoyed their visits. He loved his Grandma Alice. She was the sweetest, kindest person he knew. She never failed to make Brandon feel loved and appreciated. When his week hadn’t gone well, she always knew just what to say to comfort him. Her hugs were the cure for any bad day, sad feeling, or disappointment. Grandma Alice was the best.

It was a regular Sunday visit, and Brandon was excited to give Grandma Alice her donuts because they were decorated with smiley faces. He had also prepared a great joke for Lila. It was going to be an awesome visit.

On his way to see Lila, he said hello to each familiar face. When he arrived at the nurse’s station, he didn’t see Lila. Where was she? “Gee, I really wanted to tell her my joke,” he thought.

Just then he heard a loud commotion from the room behind him. He turned to see Lila rushing out of the room as a box of tissues flew after her. Then he heard an old woman shout, “And stay out!”

“No, you won’t! I’m skipping dinner tonight. I want you all to just leave me alone,” the voice said.

Lila closed the door behind her and shook her head. When she saw Brandon, her face turned into a big smile.

“Well, she’s pretty lonely, and lonely often turns into being sad; and sad sometimes turns into grumpy. Her husband died a few years ago and then her son died six months ago. She doesn’t have anyone to visit her like your Grandma Alice does. So, she sits in her room and watches television by herself every day. She doesn’t like anyone to bother her, but I think she really needs a friend,” Lila explains.

“She doesn’t ever come out?” Brandon asked.

“Sometimes, but she doesn’t talk to anyone and sits alone.”

“Maybe she just needs someone to talk to her. Or maybe if she was invited to play scrabble, she would stay out of her room longer.” It seemed simple to Brandon.

“Maybe. Okay, buddy, what joke do you have for me today?”

“Oh, it’s a good one today Lila. What do you call a bear with no teeth?”

Lila laughed and gave Brandon a hug. He was glad she liked his joke. But Brandon thought about Ms. Shoeman, and he felt sad for her. He didn’t want her to be alone. He wondered if she would like his joke.

On the way to Grandma Alice’s room, Brandon continued to think about Ms. Shoeman. Maybe he should say hello to her. But, what if she threw a tissue box at him? He decided to talk to Grandma Alice about. She would know what to do.

“Grandma, I have to talk to you about Ms. Shoeman,” Brandon said excitedly.

“What about Ms. Shoeman?” She asked as they sat down at the scrabble board.

“She threw a tissue box at Lila.”

“Yes, and Lila says she is lonely because her husband and son died. She doesn’t have anyone to visit her.”

“I see. It sounds like Ms. Shoeman needs a friend,” Grandma Alice said.

“I think she does, but I don’t know,” Brandon said.

“I’m kind of nervous because she is so grumpy. What if she throws a tissue box at me too?”

“You’ll never know until you try.”

“I guess so. I just need to get rid of the butterflies in my stomach first,” said Brandon.

“Brandon, you have such a good heart. I think you just need to be….” She put down five tiles on the scrabble board, and it read, “BRAVE.”

The following Sunday Brandon showed up with two boxes of donuts. He went to the nurse’s station like always and told Lila his new joke. But he was in a hurry to make his next stop.

“Lila, would you hang onto Grandma Alice’s donuts for me?”

“Sure. Where are you going with the other box?” Lila asked.

“That’s very nice of you Brandon.”

Brandon slowly walked to Ms. Shoeman’s door. It was open just a crack. He took a big deep breath and said,

“Ms. Shoeman? I brought you some donuts.”

Then just when Brandon’s heart began to sink, “What kind of donuts are they?” Ms. Shoeman asked.

Brandon smiled and opened the door a little more. Ms. Shoeman was sitting on a couch watching “I Love Lucy.”

She was a thin woman who had short white hair that she kept tucked behind her ears. She had a grumpy look on her face and looked at Brandon over her thick-rimmed glasses.

“They are jelly filled. My Grandma Alice likes the lemon filling, but I thought maybe you would like jelly instead.” Brandon was nervous.

Brandon slid into the room very slowly. He held the box of donuts in front of him. His eyes darted around the room, and he saw it… the box of tissues. It was sitting on her coffee table. He gulped.

“I do enjoy jelly donuts. What’s your name young man?”

“You come to visit your grandma every Sunday, don’t you? I hear you tell that nurse out there your jokes.”

“Yes, ma’am.” Brandon started to sweat. Was she going to yell at him too?

“I liked the joke about the Gummy Bear,” she said.

She heard his joke? Wait, she liked his jokes? Brandon couldn’t believe it. Then what happened next shocked him.

Ms. Shoeman leaned over to pick something up from the coffee table. Brandon put his hands up to guard his face from the tissue box that would surely be flying his way. But instead, Ms. Shoeman picked up the television remote and turned the TV off.

“Would you like to come sit and visit with me for a bit?” She asked.

He walked over and handed her the donuts and then sat beside her on the couch.

“You’re welcome.” She smiled and handed him a donut. As he took his first bite, he saw a Checker’s board on her book shelf. He got an idea.

“I was wondering if you wanted to play a game of Checkers with me? Maybe we could be friends?” He asked.

Ms. Shoeman stopped chewing and looked at Brandon. Her eyes welled with tears. She gave him another warm smile, then, very softly, she said, “I would really like that. I know coming to visit me must have been a little scary, but I want to thank you for being so brave. I would love to play a game of Checkers with you.” 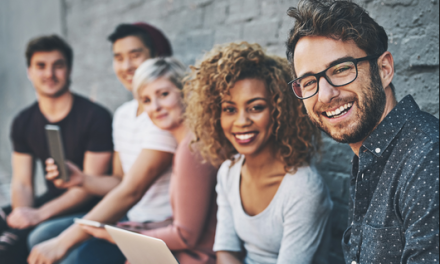 Be Kind to Employees

Does It Take More Muscles to Frown or Smile?