There is a famous quotation often attributed to Mark Twain. It goes like this:

“Kindness is language the deaf can hear.”

The quote is often shared as if being spoken by Twain. Truth be told, we have no record of him ever saying it. If imitation is the most sincere form of flattery, I guess attribution is the second most. There is so much wit and wisdom belonging to the famous American writer, it’s no wonder people think he said these words.

I fully agree with the sentiment of the quotation. Kindness is indeed a universal language, able to be understood by anyone from anywhere, with or without any other ability. A person who is deaf can still hear the voice of a good deed. A person with blindness can still see the symbolism of a merciful act.

Here is something funny, however, about the misattribution of this quote to Mark Twain. The cynical humorist himself is not known for his optimism concerning human behavior. What he was known for saying was that anyone who wasn’t a pessimist is a fool. Twain had what Louis Budd refers to as a “lifelong suspicion that the mass of mankind is venal, doltish, feckless, and tyrannical,” and most people seem to be fools who spread the condition everywhere.

Sometimes I’m inclined to side with the real Twain. Just after finishing this article, go to your browser and look up the latest news. See how many instances there are of corruption, stupidity, cowardice, and oppression in the world, sometimes even in your own backyard. It doesn’t take Huck Finn scrambling through the underbelly of society with a child’s eyes to see that.

Maybe Mark Twain was right. Even so, there’s no better time than now to try and prove him wrong. And believe me, there are people out there doing just that. In fact, maybe sometimes we’re too blind to see the language.

Let’s take a moment to do a kind thing and identify the actual quote with its original speaker, Christian Nestell Bovee. In 1857 the budding philosopher wrote a book titled Thoughts, Feelings, & Fancies. While Edgar Allen Poe was publishing dark stories of unkind human hearts, Bovee was doing just the opposite. The famous quote we credit to Twain actually came from Bovee’s book. It went like this:

“Kindness is a language the dumb can speak, and the deaf can hear and understand.”

Five years later, in another book, he revised it as a definition:

“Kindness: A language which the [mute] can speak, and the deaf can understand. It speaks well for the native kindness of our hearts, that nothing gives us greater pleasure than to feel we are conferring it.”

So there it is; the quotation in its entirety.

I think Mark Twain is very relevant proof that we do need a kindness movement. I also think Bovee is relevant, proof that a kindness movement can take off. After all, his quote certainly did, so much so that people think Twain said it. Both Twain and Bovee had quite progressive views, which means that, as dark as humanity can be, there is potential for our character to change.

So maybe Twain made the acute observations necessary to motivate us to be better people. But Bovee had the hope of heart. He also said that “Only optimism looks wisely on life,” and, “A genial optimist who praises much scatters flowers in our way.”

There is wisdom in that dose of pessimism that lets us tread carefully on the road. We know people can be nasty to one another. But without optimism, where will we find a way to stop being nasty? How will the flowers grow if all we do is pout about them failing to sprout? Start spreading some seed!

Kindness is a language. We all speak it. We can always grow more adept at it. Why not begin your lessons now? Kindness cards are a way to help teach yourself, and teach others, to engage in more acts of kindness, from small to great.

The deaf will hear it. The mute will speak it. Kindness will be spoken. 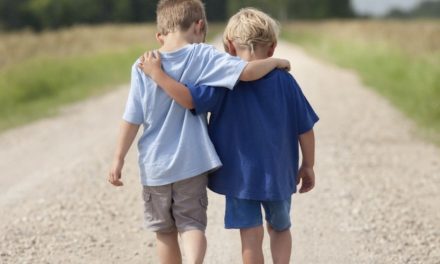 Showing Kindness to Someone Who Just Had a Baby